← more from
Castles In Space
Get fresh music recommendations delivered to your inbox every Friday. 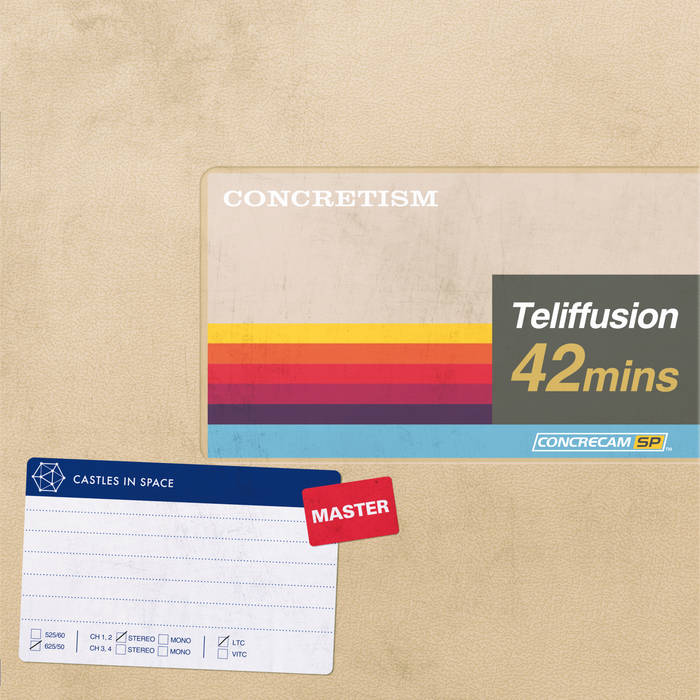 Kevin Grosvenor / Loopingstar I’ve been a big Concretism fan since his early EPs . Just can’t get enough of those slightly creepy wonky synths and glitchy LowFi beats ! Another fantastic album , the music of cathode ray tubes and test transmissions from a distant past Favorite track: Teliffusion.

marc carter Black and burst is my favorite track. So dark, with an abstract symth edge to it. Favorite track: Orthicon Halo.

Martin Woke up seeing this was newly released and bought it right away. Now listening I can state that of all Concretism releases this is the one that feels most "finished" to me. Epic instrumentation and melodies and the Concretism feel with a twist towards light.⭐⭐⭐⭐⭐

jbotham1 All I know is that this album makes me feel really good whenever it’s on. A fantastic vinyl pressing too. Favorite track: Orthicon Halo.

“Teliffusion” is the first new Concretism album for three years - his first full album since 2018’s classic “For Concrete and Country”.

“It's is an album that had been brewing in my head for a while, and was inspired by the early years of my audio-post career, when studios still used physical tapes, all but phased out now since everything went tapeless. The album is an homage to the obsolete television technology that has faded into history, like the video on an overused Beta SP tape, never to return, but of which whose ghosts still linger…” Chris Sharp, Essex, 2021

So, we enter Chris’s world of obsolete tape formats, time codes and problematic system synchronisation. A world of analogue technology and artefacts that have disappeared from use - at least in the Western World. A lost world of orthicon halos, chroma and separate red, green and blue images. Three-quarter-inch U Matic tapes and Betacam. With the usual attention to detail, opening track “09:59:59:24” refers to the final frame before the programme starts when working with tapes at 25 frames a second. The track features actual audio time code. “Genlock” references broadcast systems with an analog generator-lock signal consisting of vertical and horizontal synchronizing pulses together in the form of a colourburst.

It’s further evidence of Chris being able to find the romance and beauty in the technical and non-theoretical. The results of this academic discourse are not cold and distant, but somehow deeply emotional.

The beautiful artwork is once again provided by long time Concretism collaborator, Richard Littler of Scarfolk and Dick and Stewart infamy.

"Even in the sleepiest corners of Chris Sharp’s native Essex, the battle between Betamax and VHS must surely now have been settled. But Teliffusion is an homage to the outmoded TV and video formats of his youth, introducing a fuzzy warmth to Sharp’s trademark dystopian synthscapes. In ‘Luma’, the relentless ticks of a front parlour clock are quickly subsumed by radiophonic sweeps, and ‘Red, Green, Blue’ has plummy samples from some Precambrian BBC training tape. The perfect musical evocation of the vertical hold going haywire once again."

Written, Produced and Mastered by Chris Sharp.
Graphics and Design by Richard Littler.